The next deadline for nominations will be in November 2021.
Please submit nominations through https://neutronscattering.org/nominations/. 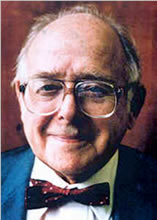 To recognize outstanding research in neutron science and leadership promoting the North American neutron scattering community in honor of Clifford G. Shull, who received the Nobel Prize in 1994 with Bert Brockhouse for seminal developments in the field of neutron science. Consideration shall be given to outstanding research accomplishments and contributions to the advancement of neutron science, including developing or supporting the North American neutron scattering community through teaching, research, technical leadership and scientific writings. Preference shall be given to applicants whose work was carried out predominantly in North America.

The prize consists of a plaque and an honorarium of $5,000 to be presented at the American Conference on Neutron Scattering (ACNS). The recipient is expected to present an invited talk at the conference. A stipend towards travel expenses to the conference will be paid in addition to the honorarium.

The NSSA Clifford G. Shull Neutron Prize is expected to be awarded biennially at the corresponding ACNS meeting.

We strongly encourage nominations of candidates from diverse backgrounds, including those from non- majority races, religions, gender identifications, sexual orientations, ages, disability statuses, and other identifiers.

The award cannot be awarded posthumously.

For his seminal contributions to the observation of the fundamental quantum- mechanical nature of spins through the effects of rotation and the gravitational field, using neutron interferometry, including the observation of the Aharonov- Casher effect, for his extensive work with neutron scattering on the magnetic properties of transition metals and their alloys, for his critical role in the NSSA, particularly as its Founding President, and for his wide and lasting influence on the neutron community, including nurturing of many neutron scientists.

For leadership in the development, application and establishment of neutron reflectometry as an essential measurement tool for nanoscale materials

In recognition of his deep and lasting experimental and theoretical contributions to the areas of Quantum Liquids and Solids, Superconductivity, Magnetism, Soft Condensed Matter, Confined and Adsorbed Liquids, Surfaces, and Neutron Scattering Techniques, together with his selfless service to the neutron scattering field as a whole

For his seminal scientific contributions, tireless leadership, and devoted mentoring in the field of neutron scattering

For outstanding contributions to the study of magnetism, superconductivity, and quantum phenomena in matter with neutrons

For seminal contributions to understanding the dynamical properties of supercooled and interfacial water using neutron scattering techniques, and for an exceptional record of training young scientists in the use of scattering techniques to solve topical interdisciplinary problems in complex fluids and soft matter

For seminal contributions to the development of neutron sources and instrumentation that have had world-wide impact on neutron scattering across a broad range of scientific disciplines, culminating in the optimized design of the Spallation Neutron Source at Oak Ridge

For his seminal vision, leadership, and contributions to the field of neutron scattering