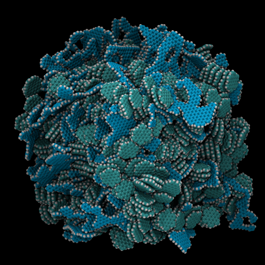 A team from Oak Ridge National Laboratory and the University of Tennessee studied carbon fibers made from lignin, a woody plant polymer known as, and found a mixture of perfectly spherical nanoscale crystallites distributed within a fibrous matrix. They found the lignin fiber’s unique structure could make it useful as a battery anode, potentially improving upon graphitic materials found in most lithium-ion batteries. Lignin, a low-cost byproduct of the pulp, paper and biofuels industries, could be transformed into a cheaper version of highly engineered graphite through a simple and industrially scalable manufacturing process. The team ran neutron scattering experiments at ORNL’s Spallation Neutron Source (SNS) to analyze how lignin-based fiber samples reacted with lithium. Using neutron data, they developed computational models and ran simulations on supercomputers including the Oak Ridge Leadership Computing Facility’s (OLCF) Titan, supported by DOE’s Office of Science, and UT’s Kraken, supported by the National Science Foundation. The team detailed its approach in the Journal of Applied Crystallography. The initial combination of neutron experiments and simulation gave the UT-ORNL team a first glimpse into how the material’s structure affects its overall performance. Now that they have confirmed their model’s accuracy, the researchers plan on applying the technique to how the material’s structure changes with and without added lithium, mimicking the charging and discharging cycles of a real battery.